This week’s Sepia Saturday theme is Work.  Whatever interpretation of work you wish to write about.  Here’s mine…

I previously posted some photos of Douglas and Elsie glammed-up (I still haven’t got over the black lace Madonna-style evening gloves) for various nights out, and I think I have identified what one of the occasions may have been.  I found this photo of Douglas (front row, 4th from left) and a group of similarly professional-looking gentlemen

and typed on the back is “BMC Conference 21/23 Feb 1967”.  Ah!  Light bulb moment – BMC stands for British Motor Corporation, and Douglas was managing a car dealership at the time.  BMC produced a wide range of cars including Austin, Morris, MG and Austin-Healey, which explains why I have this in my possession

and I can just imagine Elsie powdering her nose with Douglas’s freebie promotional products provided by MG.  Although, I’d rather I had this

AND she used the entire powder compact and didn’t replaced it with a refill.  Perhaps another new one came along?

Douglas, on the other hand, was also the recipient of some corporate gifts 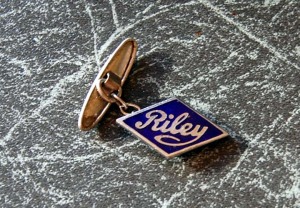 I only found one of these in Elsie’s sewing box, and I’m sure Douglas was originally  presented with two cufflinks, but given the battered and abused state of her sewing box, I’m not surprised that only one could be found and was saved in case the other one turned up.   Here’s a picture of a Riley Elf – Elsie had one, and so did her sister, Jan.

Due to the blurring in this picture, I suspect Jan was driving.  She used to meet up with her “ladies” for lunch in Dairsie several times a week, and a few sherries were consumed before heading for home.  Jan never paid extra for the option of a radio in her car, as she enjoyed singing loudly while driving, and would happily sing while “…overtaking the  pantechnicons…”   It’s a wonder that she lived as long as she did 🙂

Now, Hi Ho, Hi Ho, It’s off to Work we go – check out what the other Sepia Saturday posters came up with on the subject 🙂

Scottish genealogist - this blog is for my own family history and photos
View all posts by Jo Graham →
This entry was posted in Photos, Sepia Saturday. Bookmark the permalink.