This week’s theme for Sepia Saturday is “going out”, as suggested by Liz Stratton of Attics and Old Lace.  I could have posted many photos of the family on outings to the playground, picnics, or fishing trips, but I chose a few showing my maternal grandparents, Douglas and Elsie (of the road trip to Monaco) going out to dinner.  Please feel free to come along! 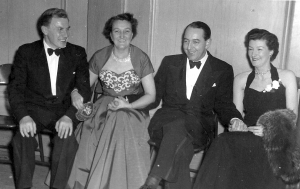 Here they are at a social event in 1950 – they’re the couple on the left.  I don’t know who their friends are but they were obviously close, and I love the lady’s halter neck dress.  On close inspection, I wonder if the man is Elsie’s younger brother, Bill, who was a surgeon and emigrated from Scotland to the US.  I don’t remember ever meeting him.  His sisters called him “Wee Billy B” as he was the baby of the family 🙂

And again at a Christmas Bash in December 1951 – Elsie’s sister, Jan, is the lady on the left sporting a rather nautical-looking hat similar to the man in the middle.  I wonder what that was about?  If you look closely behind the glamorous lady holding a glass of wine, there is someone loitering at the door with a shopping bag.  It’s not Santa, then. 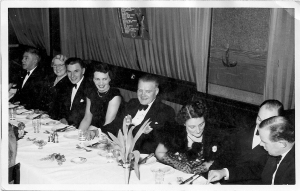 Grub’s up!  We’re waiting on the dessert course and Elsie is showing great interest in something on the table.  Where on earth did she get those black lacy gloves?  There’s a poster pinned to the curtains – maybe it was advertising the entertainment for the evening?

Douglas looks rather proprietorial with his hands clasped in front of him.  Some of the boys at the back look very young.  Maybe it was a “works do”?  Douglas started off as a mechanic and ending up running a motor dealership in Dunfermline, so maybe the youngsters were apprentice mechanics.

A more recent shot – I reckon from the 1980’s.  Elsie is in red with Douglas’s brother, Norman, on her right.  The brothers were spread out over the UK, but met up regularly.  It must have been cold outside – look at the condensation on the windows.  Do you think Douglas is trying to stick his fingers in his ears as the piper goes past?  🙂

Go out with the other Sepia Saturday contributors and have fun!

Before we pack up and get in the taxi, Jen at Climbing My Family Tree says that Google Friend Connect no longer works with WordPress blogs, so if you follow me using Friend Connect, you’ll need to add me again using another method.

Scottish genealogist - this blog is for my own family history and photos
View all posts by Jo Graham →
This entry was posted in Photos, Sepia Saturday. Bookmark the permalink.

22 Responses to Sepia Saturday 118 – Going Out – no bagpipes please!

Thanks for following. Please leave a comment - I'd love to hear what you think :-) Cancel reply