Alan found an interesting photo of a levitating hat for this week’s Sepia Saturday and, as Granny always seemed to be wearing a hat in the 1920’s, I had a look in Great Granny’s album to see if I could find a particularly flamboyant or interesting hat.  Sadly, the fashion was for cloche hats, so I didn’t find anything over the top.  Apart from her behaviour at times… 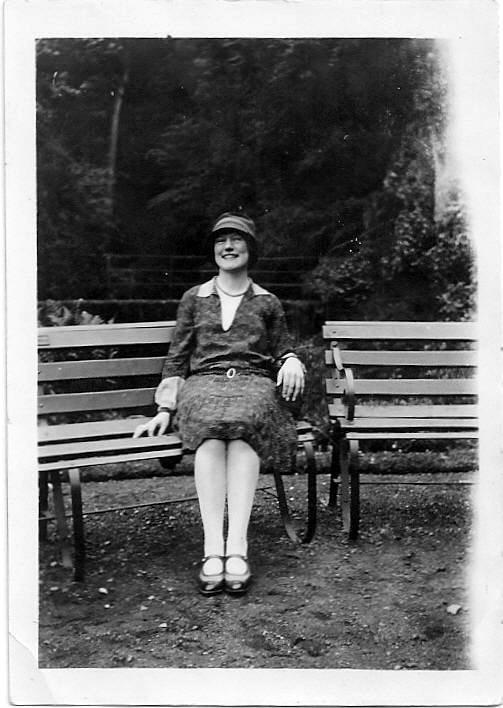 “Alvi Glen May 1928” is written on the back of the photo, but I think it should say Alva Glen, which is to the north of the town of Alva, at the foot of the Ochil Hills about 7 miles from Stirling.  It’s now a very popular peaceful  place for outdoor activities but not long ago it was the centre of the Clackmannanshire textile industry.

Granny certainly wasn’t wearing the right gear for going walking, but she always seems to have been smartly dressed no matter what she was up to – climbing trees with her cousins, having a picnic or sitting on the roof of a car.

Don’t they look as though they’re having fun?  I don’t know who her friend is, but Granny’s indulging in her knee-grappling habit again 🙂

An interesting story about Alva Glen Quarry which was used as a source of rock and gravel for centuries until the 1920s:  On Christmas Eve in 1913, James Murdoch was working in the quarry when he noticed an area of rock that didn’t look like a natural rock face. Mr Murdoch started removing the stones and, lying there with its knees drawn up, was a human skeleton.

The skeleton was examined by experts who concluded that it was prehistoric – an unusually short person who was not the victim of some prehistoric mining accident, but had been placed in the cavity after death.  The story had a sting in its tail.  At the same spot a few days later, a slab of rock fell on James Murdoch, and killed him. Some saw this as coincidence, but others saw it as retribution for disturbing the dead…

To the best of my knowledge, Granny wasn’t into rock climbing, but if she had been, she’d probably still have dressed up for it.

Now off you go to Sepia Saturday to see what the other Sepians have posted.

Scottish genealogist - this blog is for my own family history and photos
View all posts by Jo Graham →
This entry was posted in Great Granny's album, Sepia Saturday. Bookmark the permalink.

Leave a Reply to Tattered and Lost Cancel reply